A social media user, Abdul-Salam Abolanle posted photos of a man who was apprehended while allegedly attempting to break into his neighbour’s house in Ikorodu area of Lagos. Read his story below.

“Last week, a young man attempted to brake-in into my neighbor’s house, luckily they had a peculiar security measure which alerted them and the young man was caught and handed over to the Police,” he wrote.

“During our discussion of the incident at the meeting I raised a point that everyone had become less active in respect of security just because we heard that Baddoo has been rooted out of Ikorodu. Some people agreed with me while others said it cannot happen again in Ikorodu. 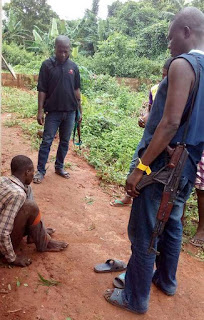 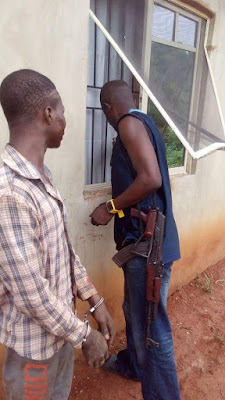 “The Baddoo Cult is a human cult and they think as you think, just that they think ahead of you. They know that if they make it look like they have stopped operating in Ikorodu everybody will let down their guards. That is exactly what just happened. Even the Police is caught by surprise!

“As long as they have their clientele who are ready to pay them for their diabolical acts somewhere they will always operate.

“Somebody said “may God help us”, I say amen to that but that alone won’t solve the problem. We need to expose and uproot the problem totally.

“Ask a farmer about how to kill a banana tree. That’s what we need. All these conferences and meetings won’t totally solve the problem.”