The presidency has debunked claims of having a plan to stop the use of the Bimodal Voter Registration System (BVAS) in the 2023 elections.

Presidential spokesperson, Femi Adesina who spoke at a policy dialogue organized to mark the 2022 International Day to End Impunity for Crimes Against Journalists (IDEI) on Tuesday November 1, added that there’s also no plan to remove Mahmood Yakubu as chairman of the Independent National Electoral Commission (INEC).

“Recently, there was one group that said the chairman of INEC was going to be removed because maybe they didn’t want BVAS.

“How many times has the president spoken about the role of technology in getting him into office?

“He has spoken about it locally, internationally that three times he contested, three times he ended at the Supreme Court because the government of the day will just write results.

“Then he said until technology came and there was permanent voter cards and so it was difficult to write results.

“So, how and why can the same person have issues with BVAS? I saw that group on television, alleging that there was a plan to remove the INEC chairman and the media gave them that opportunity.

“Such things should be treated with contradictions because they don’t make sense, at least not under the administration of President Muhammadu Buhari.” 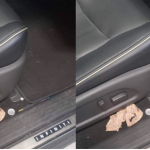