According to reports, Obasi was arrested yesterday by the police while he was feigning to be a traffic warden at Milverton Avenue in Aba. On sighting the police, he took to his heels but the police pursued and caught him.

Items found on him by the police include a bullet proof vest that contained three live cartridges, one jack knife and a passport.

The state commissioner of police, Leye Oyebade, who paraded him before newsmen, said Obasi has confessed to being a member of a four-man robbery gang. Oyebade added that the police is now in search of the remaining members of his gang. 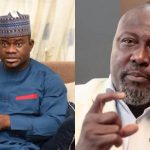