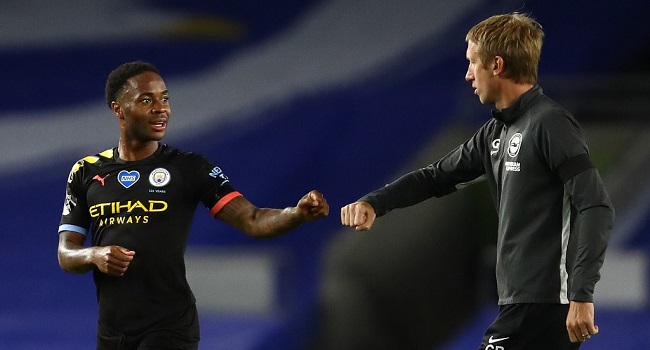 Raheem Sterling scored a hat-trick as Manchester City ensured they will finish in the Premier League’s top four with a 5-0 win over Brighton on Saturday as the club wait to find out whether they will be allowed to compete in the Champions League next season.

City were handed a two-season ban from European competitions by UEFA in February, but appealed that decision to the Court of Arbitration for Sport which will deliver its verdict on Monday.

On the field, there is no doubt Pep Guardiola’s men deserve their place among the elite of European football next season with another display that belied the 21-point gap between them and champions Liverpool.

Too often City have been found wanting for failing to take their chances and punished for defensive lapses at the other end.

However, there was never any chance of Brighton adding to their nine defeats this season once Sterling curled home his 25th goal of the season with unerring accuracy into the far corner.

Gabriel Jesus’s deflected shot came back off the crossbar and he then teed up Riyad Mahrez with some nifty footwork only for the Algerian to curl a great chance wide.

Jesus could be burdened with the responsibility of leading the line when City’s 2019/20 Champions League season gets back underway in August with Sergio Aguero facing a race against time to be fit after knee surgery.

The Brazilian has not always been the most prolific finisher, but showed striker’s instincts to tap Rodrigo’s flick-on for a corner to make it 2-0 just before half-time with his 20th goal of the season.

Sterling notched his second of the night in unusual fashion by crashing home a header from Mahrez’s teasing cross.

Brighton did themselves no favours for the fourth as Mat Ryan spiled a Bernardo Silva shot he should have held and Jesus teed up the Portuguese midfielder to roll into an unguarded net at the second attempt.

Guardiola was then able to ring the changes as he continues to prepare for next weekend’s FA Cup semi-final against Arsenal and the return of the Champions League next month.

Sterling was left on as Kevin De Bruyne and Jesus made way to give him the chance of securing a hat-trick and he did so with a hint of fortune as the ball ricocheted off his head after he had fallen to the floor inside the area and Dan Burn failed to clear the ball off the line.

Brighton are still not mathematically safe as they remain eight points above the relegation zone, but Graham Potter’s men should already have enough points on the board as third-bottom Bournemouth face the daunting task of being City’s next opponents on Wednesday. 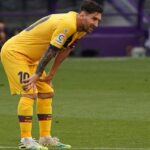 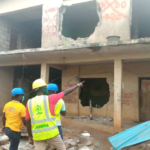