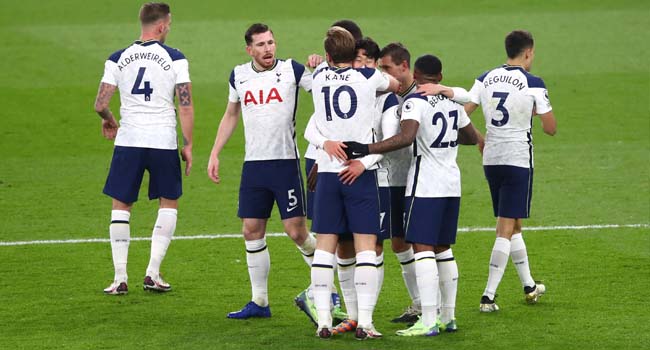 South Korean star, Son Heung-min and English forward, Harry Kane netted a goal each in the first half to hand Tottenham a comfortable 2-0 win over Arsenal on Sunday, condemning the Gunners to a second consecutive league defeat.

A crowd of 2,000 Tottenham fans were in attendance for the first time in nine months to enjoy seeing their side inflict another blow to a rapidly unravelling season for the Gunners.

Spurs are unbeaten in 10 league games and have taken seven points from a difficult run against Manchester City, Chelsea and their north London rivals over the past three games.

“We grew up. I can imagine lots of people can imagine three matches in a row against Manchester City, Chelsea and Arsenal, would be a moment for us to drop points and go back to normality,” said Mourinho. “But we didn’t go back to normality. We are there. I believe one more week at the top of the table unless Liverpool win by many.”

Mourinho’s men moved two points clear of Chelsea at the summit, but Liverpool can move level on points at the top with victory over Wolves later at Anfield.

A first league title in 60 years for Tottenham may depend on keeping Kane and Son fit as they have hit a combined 27 goals in all competitions this season.

The South Korean opened the scoring in stunning fashion as he collected Kane’s pass down the left and cut inside to curl into the top corner.

That was the 10th of Son’s 13 goals this season for which Kane provided the assist.

By contrast, Arsenal have scored just 10 goals in 11 league games all season and despite plenty of intricate build-up play, Mikel Arteta’s men again failed to provide any cutting edge in the final third.

“We have to score goals. If not, it’s unsustainable” said Arteta, whose side are languishing in 15th after a fifth defeat in seven games.

The difference between the teams was summed up in first-half stoppage time as from what appeared a dangerous Arsenal attack, one long ball set Spurs on a four against two break as Thomas Partey had already pulled up with an injury.

Son took his time before feeding Kane, who smashed in off the underside of the bar from a narrow angle to become the all-time top goalscorer in north London derbies.

“That’s exactly what we set out for,” said Kane. “Sonny and I are feeling good. When he’s picking up passes and sticking it top bins, he makes me look good!

“For us it’s one game at a time, but results like this and the last couple of weeks will only help us.”

Arteta was angry at Partey for not saying on the field and leaving his side exposed.

The Ghanaian came to the side of the pitch waiting to be substituted after suffering a recurrence of a thigh injury as Spurs raced up the field.

“I applaud their first goal, it is world class, but the second goal we are a man down, we leave a massive gap and they take advantage. He has to stay on the pitch. It looks like the same injury he has already had.”

Pierre-Emerick Aubameyang is still to score a Premier League goal from open play since signing a lucrative new contract worth a reported £55 million ($73 million) over three years in September.

The closest the Arsenal captain came to breaking his drought was a header from Kieran Tierney’s excellent cross that Aubameyang headed over.

Hugo Lloris twice saved from Alexandre Lacazette headers low to his right as Arsenal camped in the Spurs half for the second period without any reward.

The visitors enjoyed 68 percent possession and had more shots on goal, but did not have the class in front of goal shown by Kane and Son to make the difference. 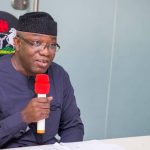 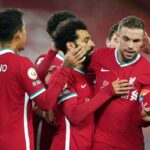