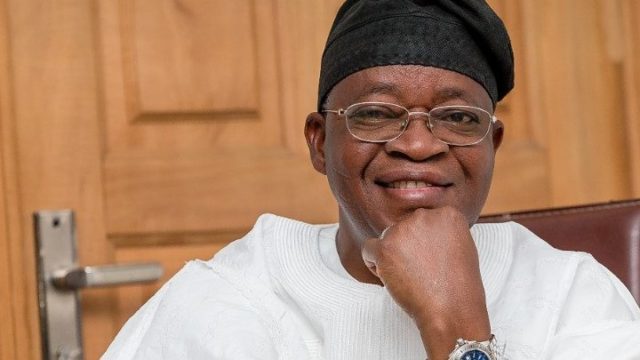 Osun State Governor Gboyega Oyetola yesterday restated his promise to run a participatory government that will accommodate the interest of different religious bodies.

He said his government will be fair to everybody, regardless of socio-economic, political and religious background.

The governor promised that he would promote religious tolerance and harmony.

Oyetola spoke at a meeting with officials of Osun State chapter of the Christian Association of Nigeria (OS-CAN) in his office in Osogbo, the state capital.

The governor, who expressed his belief in the efficacy of prayers, urged religious leaders to pray for the success of his administration.

He also appealed to them to form a synergy with his government by accommodating robust interaction that will discourage the activities of rumour mongers and faceless individuals who use the social media and other means to fan the embers of disharmony in the state.

Oyetola expressed dismay over the rising cases of burglary, saying his administration would stamp crime and criminal activities across the state.

The governor said his administration had put in place necessary security infrastructure to support the security agencies for effective and efficient service delivery.

He added: “Our administration is working assiduously to maintain and sustain the tempo of peace that the state is known for.

“Since religion plays a vital role in peace maintenance, hence the need to promote religious tolerance, unity and harmony between the followers of the existing religions in the state.

“Our administration has provided the necessary logistics for security operatives in the state as part of efforts to ensure adequate protection of lives and property of the citizenry.

“We will do everything humanly possible to ensure that Osun remains the most peaceful state with least crimes rate in the country since security and welfare remain the cardinal points of our government.”

The State CAN Chairman, Rev. Michael Okodua, described Oyetola as an embodiment of humility with a peaceful disposition.