Neymar has spoken for the first time since his exit from Barcelona by commenting on Lionel Messi’s latest Instagram post.

Messi was the first Barcelona player to pay tribute to the departing Brazilian, saying: “It was a huge pleasure to have shared all these years with my friend Neymar. I wish you all good luck in this new stage of your life.”

The five time Ballon d’Or winner posted a video on Instagram to mark Neymar’s departure, and the former Santos winger has since replied.

“Thank you brother. I will miss you uncle!” 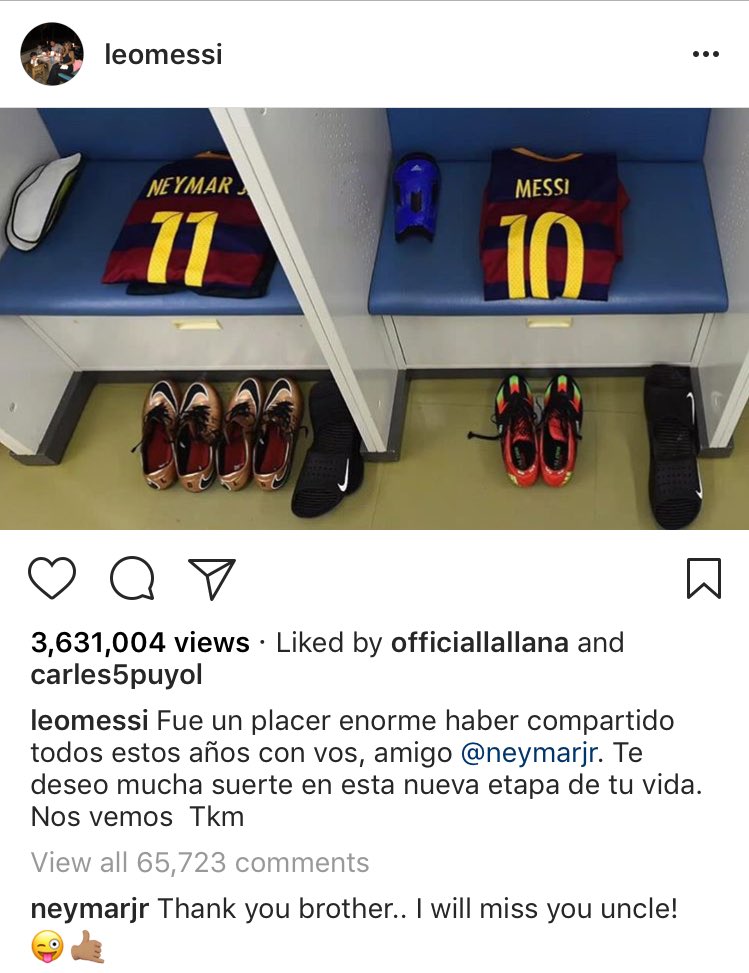 It’s been a busy 24 hours for Neymar and his entourage.

It was previously reported that the 25-year-old touched down in Dubai to discuss a move to Paris Saint Germain yesterday after Qatar’s Al-Watan newspaper reported that Neymar was expected in Doha to meet PSG president Nasser Al-Khelaifi.

Those rumours were quickly played down by the man himself after he posted a picture on his way to Spain shortly after, but it wasn’t long before Neymar was on another flight out of Barcelona.

At 9:25am on Wednesday morning, @FCBarcelona confirmed that Neymar didn’t train with the squad on Wednesday with the permission of the coach, Ernesto Valverde.

Sky Sports journalist @GuillemBalague then claimed that the player told Barcelona teammates that he will leave the club to join Paris Saint Germain, as key players were ‘fed up’ with situation.

Neymar didn't train today + told team mates he's off to PSG. Key players were fed up with situation and wanted him to say it to the group. pic.twitter.com/MDlavOeiSd

Neymar then travelled to London on Wednesday afternoon to ‘relax’, according to Cadena COPE.

According to RMC, Neymar will undertake a medical with PSG on Thursday before the club officialise his signing that evening or Friday morning.

Will he find success at the Ligue 1 club?