President Muhammadu Buhari Friday in Abuja gave an insight into his forthcoming second term in office, saying “my last lap of four years will be tough.”

Speaking while hosting members of the Federal Executive Council (FEC) in the Council Chamber of the Presidential Villa who had converged to congratulate him on his re-election, Buhari said his second term would be tough because Nigerians are so easily forgetful.

The president who said he deliberately went through the rigorous days of campaign in all the 36 states of the federation before the election, added that he opted to campaign in two states per day to make a statement to the opposition that he was strong and fit.

He also said the next administration would face the economy very squarely because of the huge unemployment rate bedeviling the country, which he said had become a huge problem to everybody.

However, he expressed gratitude to God that the agriculture sector had helped a lot in strengthening the economy through what he described as soft loans to farmers, pointing out that agricultural output has consequently been rewarding because of the steady rainy seasons.

The president who thanked God for the steady rainfall, submitted that investment in agriculture would have been a futile effort if there had been no good and promising rainy seasons.

He praised states such as Lagos, Ogun, Kebbi, Jigawa, and notably Ebonyi, which he said had played notable roles in stopping rice importation through large scale rice cultivation especially with the unpredictable state of the oil sector. 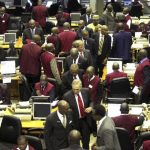