Musician and activist, Charles Oputa, popularly known as Charly Boy, has set his Facebook comment section on fire after he compared himself with some Nigerian pastors who have failed marriages.

The Area Fada on Wednesday morning shared a photo of himself with his wife, Diane Oputa and pastors Chris Oyakhilome, Joshua Iginla and Chris Okotie, who have all divorced their wives.

“Life no balance sha. Most of the time, the people wey we dey think say na dem fit no be dem. Sotey the people wey we no even give credit, na dem. What do I know sef, am a bloody sinner and I never tire for sinning. But I know God love me pass all dis una yeye wayo pastors. God punish Satan” he captioned the post.

The post which has garned over 2000 Likes and almost 1500 comments, elicited varying reactions from Nigerians.

Some people reminded the entertainer of pastors like Adeboye and Oyedepo, who have been happily married for decades and still waxing stronger. Others said that being a Man of God is no guarantee against failure in life and marriage.

One Pamela Nawndo, wrote:  You did not bring pictures of pastors who are still happily married. You just want to justify your worldly lifestyle. You are no better than them. Marriage is not a yardstick for measuring morality. Or a ticket to heaven.

Olivia Zam: They are too proud in their marriages, the godly man knows how to humble himself to keep his wife and home but these pastors think that once you are a pastor, people will be bowing down to worship you including your wife. Most of them serve their ego, no one can talk to them

Vincent Nwokoye: Devil has no business fighting to destroy his own, but always fighting the opponent from every angle/ trough their wives

Wabu Kinze: The comparison of this picture says “you don help God do the final judgement”…Remember, one of the thieves that was nailed with Jesus said to him. “Father remember me in your kingdom” and Jesus assured him of that…..So who are we to make the judgment of others.

Member Onwe: The explanation is that, they are children of God, so Satan must fight them. Know also that, on the last day, nobody go carry wife or husband enter heaven. You, Satan no go fight you na. Marriage is not the guarantee or yardstick to heaven..there will be plenty successfully married men in heaven and hell. Mind you Ahab was successfully married to Jezebel but they failed God as idolatrers and murderers…..don’t place the cart before the horse…..there will be neither marriage or given to marriage in heaven don’t forget

Michelle Ikenna: Most times the ministry is too challenging that not all women have patient. Most of them don’t endure to the last. Don’t compare your marriage to anyone’s, people are doing their best and no one will willingly wish to divorce his wife or husband. Let keep praying to God for the best

Okeafor Emmanuel: Religion is not a definition of our person, we all are born with human nature which are prone to wickness but the grace of God have been made available to all men so being religious does not save from failure rather it makes you a target for temp

Favour Umoh: Marriage first of all is more of a physical carnal affair than spiritual. Very good people filled with the Holy Ghost can still be divorced while worldly unrepentant people can succeed in marriage. A successful marriage is all about two people who are making serious conscious effort regardless of their spirituality to make heir marriage work everyday. Pastor or no pastor anybody’s marriage can fail or succeed depending on the effort put in by the two people involved. 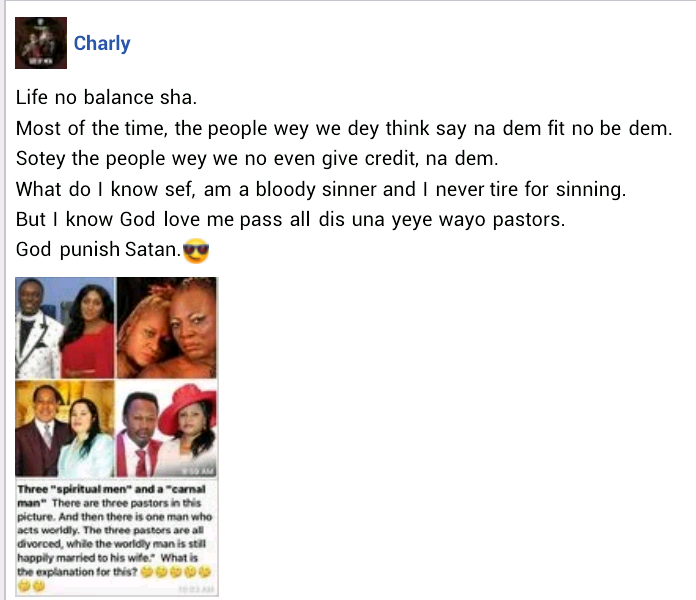 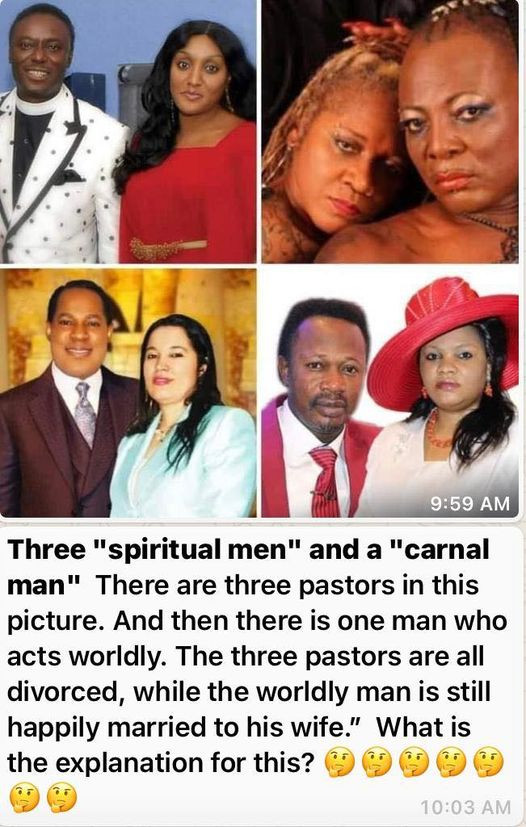 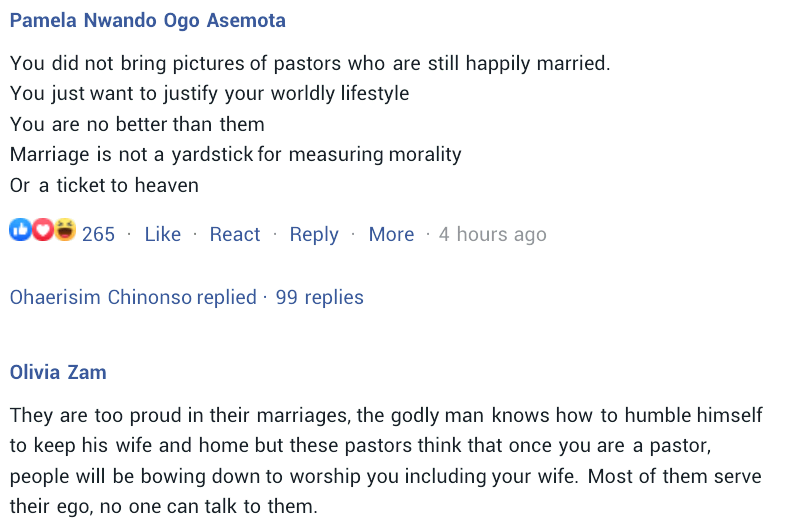 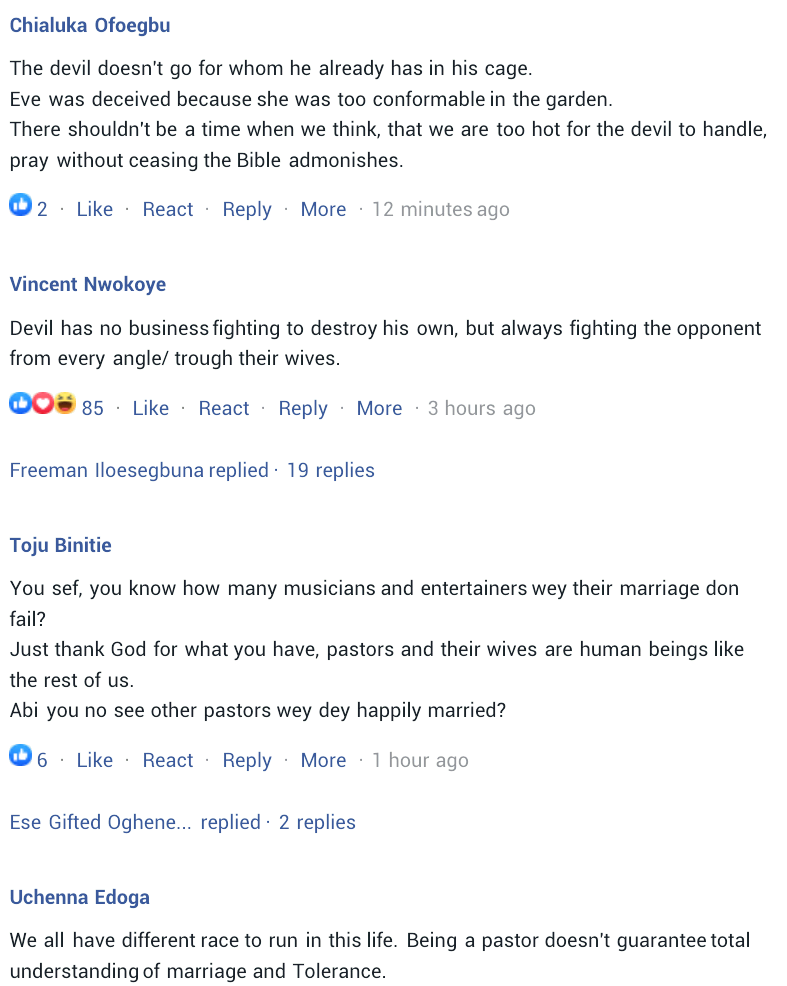 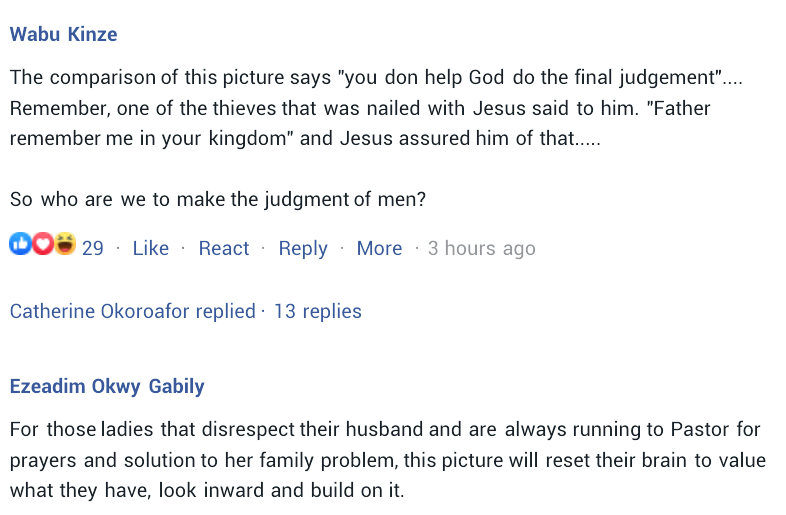 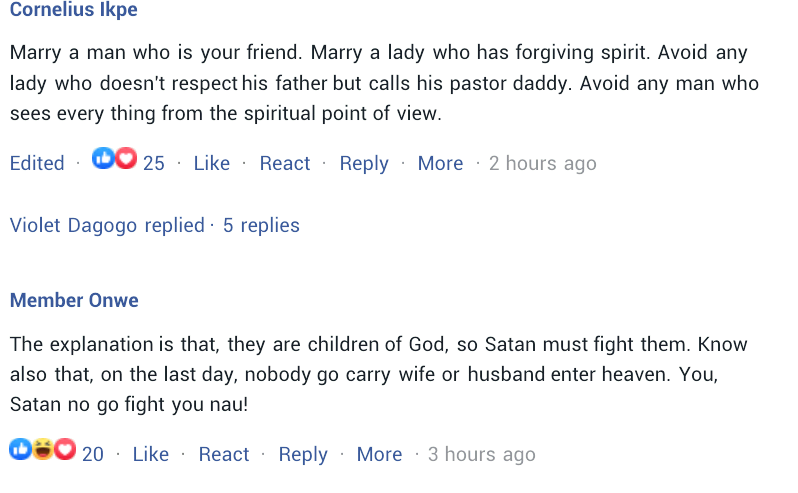 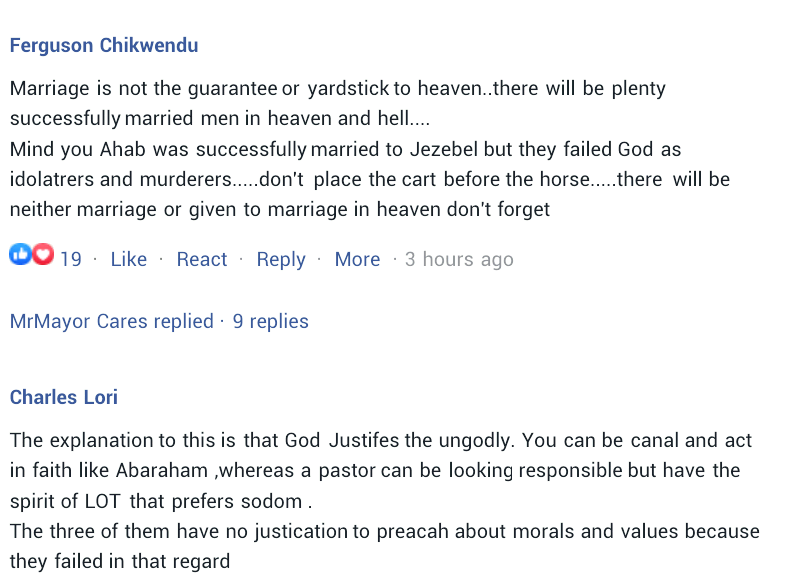 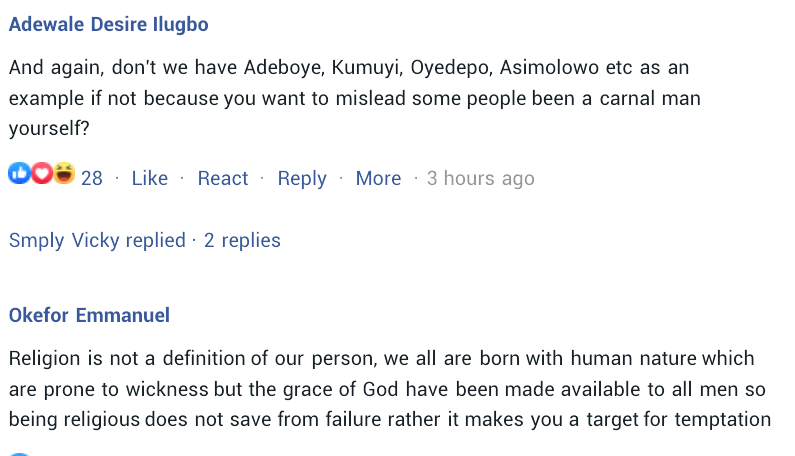 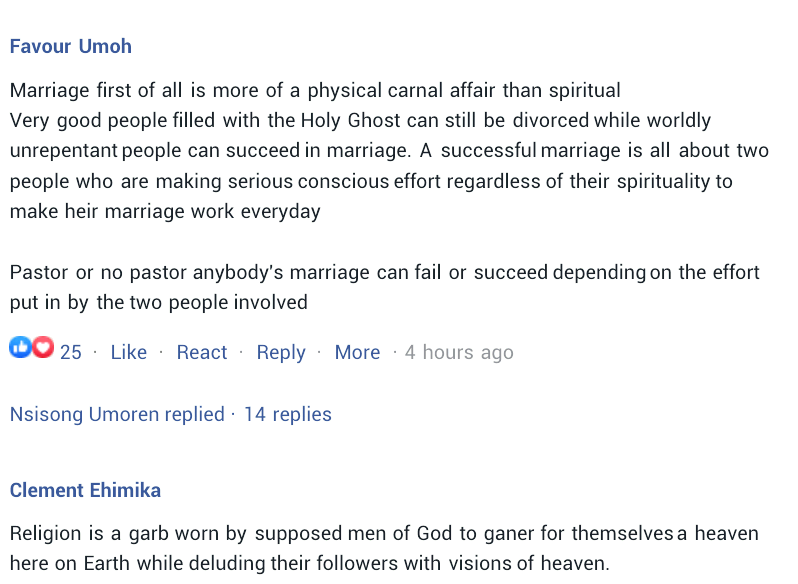 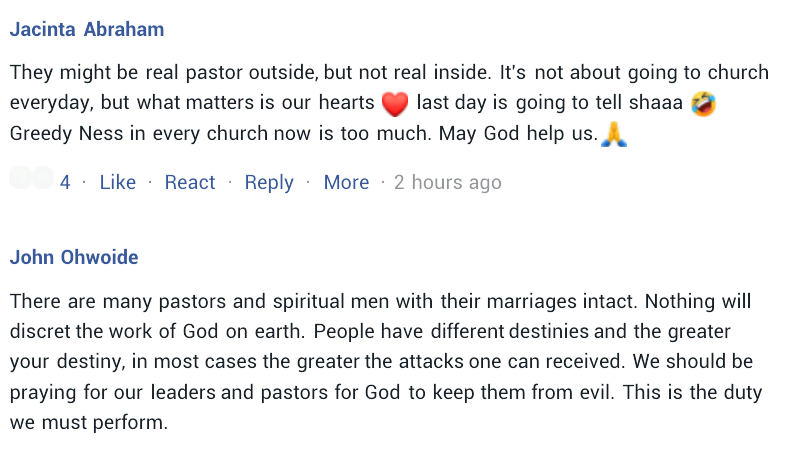 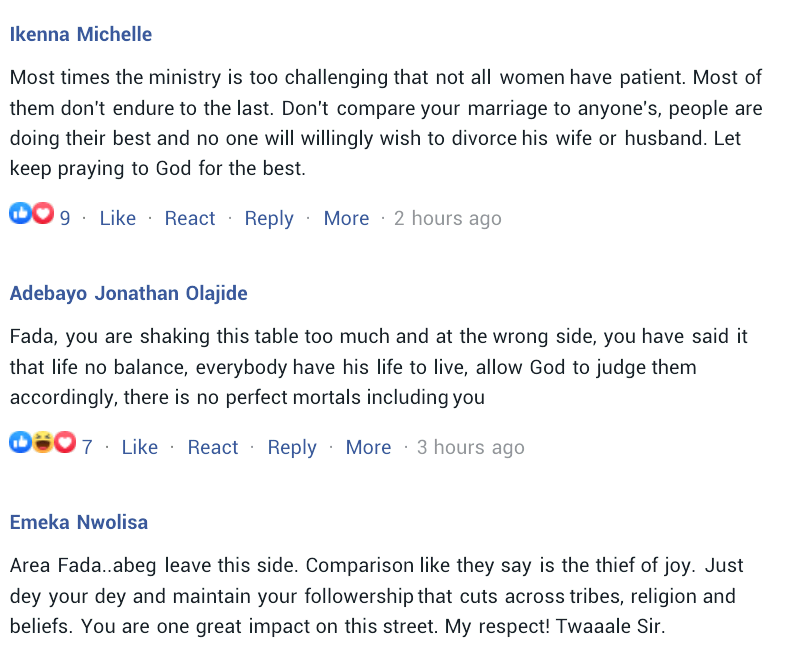 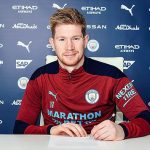 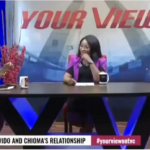