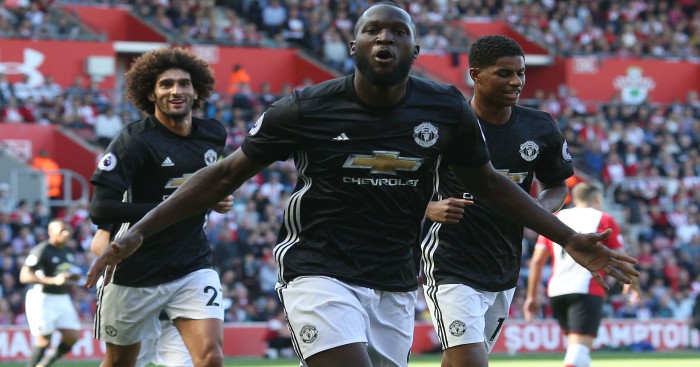 Romelu Lukaku scored his eighth goal in as many games for Manchester United to seal a 1-0 victory away to Southampton on Saturday.

The Belgium international converted a rebound in the first half to give Jose Mourinho’s side a fifth win in six Premier League games and keep pace with Manchester City at the top of the table.
It was a largely unconvincing performance from the visitors, who made the most of their one clear-cut opportunity in a comfortable first half and spent the majority of the second on the back foot.
Lukaku scored after seeing a header saved by Fraser Forster, prompting a repeat of the controversial chant from the away section in support of the former Everton man, but United created little otherwise in a disjointed display and Mourinho was sent to the stands in the dying minutes.

Mauricio Pellegrino’s side enjoyed 70 per cent of the possession in the second half but struggled to find a way through United’s rearguard, underlining the attacking problems of a team who have failed to score in nine of their last 11 home league games.

United move on to 16 points, the same as league leaders City, but Mourinho will no doubt want improvement from his side when they travel to Russia to take on CSKA Moscow in the Champions League on Wednesday.

Nathan Redmond flashed a half-volley over as Saints started in encouraging fashion, but United snatched control of the half on 20 minutes.

Ashley Young, starting again at left-back, danced his way into space and curled a fine cross onto the head of Lukaku and, although Fraser Forster saved his effort superbly, the Belgian had the simple task of scuffing the rebound into the unguarded net.

A large number of United fans celebrated with the controversial chant about Lukaku, despite the player and club asking for them to refrain from singing it this week following a complaint by anti-discrimination body Kick It Out.

United looked comfortable as they kept Saints at bay for the remainder of the half, but the home side stepped up their pursuit of an equaliser after the break and Oriol Romeu flashed a shot wide when the visitors failed to clear a corner.

Redmond then cut inside from the left and fired in a low shot across goal, forcing David de Gea to save well and gather the rebound away from the lurking Shane Long, before the Republic of Ireland striker was denied a clear run at goal by a strong shoulder charge from Phil Jones that went unpunished.

Mourinho responded to the growing pressure by bringing on Ander Herrera in midfield, and United should have snatched a second goal on the break, with Lukaku shooting straight at Forster’s feet after being played in by Henrikh Mkhitaryan.

Fellaini cleared a Dusan Tadic header from just in front of the line and the winger dragged a low cross inches past the right-hand post moments later, before Herrera blasted over the crossbar when given time and space to pick his spot on a rare United attack.

Saints kept up the pressure in the closing minutes but United held firm for an important –  though far from impressive – three points, even as Mourinho was ordered into the stands in injury time by referee Craig Pawson. 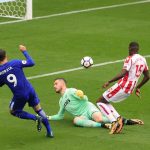 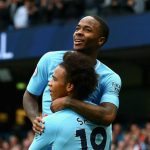