A petitioner, Silifat Adeyemo, has testified against the police, saying her husband was shot by a SARS official on November 28, 2018.

She disclosed this on Saturday while testifying before the Lagos State Judicial Panel of Inquiry and Restitution in Lekki.

“He was a Level 8 official, preparing for promotion, after almost 3 years working for the Lagos State Traffic Management Authority (LASTMA),” she said.

Adeyemo said she expected him back home from work as usual but unknown to her, something had happened at about 6 pm.

“At 10 pm that day, my sister-in-law came to my house and told me my husband was involved in an accident. I thought we were going to the hospital but instead, we went to my family house, that was when I was told that my husband was dead,” the witness said in tears.

At this point, the witness handed over a picture of the husband’s body to the panel and it is admitted into evidence as an exhibit. The panel also admitted in evidence the autopsy report.

She further testified that the SARS Official who shot her husband is one Olonode Olakunle.

According to the petitioner, to get to her business every day she still passes the route where her husband was killed and relives the trauma of his passing every time.

In her testimony, she admitted that her husband was a very popular man and after he was killed, boys in the area gathered to beat up the SARS official involved.

The official, she learned he was later rescued by the police.

She however said no punishment to the SARS officer can bring her husband back.

When asked what she wants the panel to do for her, she said that her husband left her with three children, including a set of twins, adding that his aged parents were also left without their breadwinner.

She called on the panel to help with her children’s education.

During cross-examination, the counsel to the police, Joseph Eboseremen, said that the SARS official involved was not just beaten up by boys and officials of LASTMA, he was also lynched to death.

The counsel also asked if she did not receive a N10m compensation from the Lagos State Government.

Responding, the petitioner agreed that she did but noted that the compensation was not from the Nigeria Police.

When the counsel tries to suggest that this was the compensation agreed on and the petitioner is not entitled to more, the Chairman of the panel, Justice Doris Okuwobi asked him to bring proof of this and adjourned further proceedings till December 11. 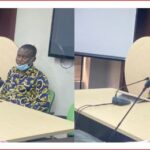 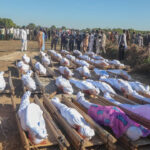