Mrs Orisadeyi who confirmed the incident, told Daily Trust that two hospitals rejected the victim before he died. It was learnt that Issac was a passenger was on motorcycle when some gunmen tried to snatch the bike from the rider around 8pm on Tuesday night November 16.

Daily Trust also reported that in another case, a young man identified as Adoja Tanaku, was beheaded after a brief argument with his friend simply identified as Joseph in Bakatare area of Ibadan. The two engaged in the hot argument before the middle aged man went into his room, took a cutlass and beheaded him.

Oyo police spokesperson, Olugbemiga Fadeyi who confirmed the incident said the deceased and Joseph were Beniniose. Fadeyi said Joseph is already in the police net while the corpse of the victim had been deposited in the morgue of Adeoyo Hospital, Ibadan. 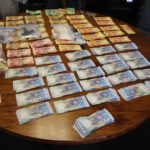