Uzoamaka Ohiri, former wife of radio personality, Chinedu Ani, popularly known as Nedu, has called on him to take care of the two children they had together.

She made this call on PUNCH Live on Tuesday, as she discussed issues surrounding her separation from the comedian.

Nedu had, in a weekend post on Instagram, claimed that he wasn’t the father of her first child, citing the result of a DNA test.

Uzoamaka, in her PUNCH Live interview, had also explained the circumstances surrounding the birth of the male child, stating, however, that throughout their marriage, she was faithful to Nedu.

She stated that since the comedian walked out of their marriage four years ago, she had been solely responsible for the care of the two children which, she noted, Nedu had fathered.

According to Uzoamaka, Nedu barely knows the last child, a female, because they separated not long after the child was born.

She lamented that though Nedu is their father, he is not being supportive towards their welfare.

Uzoamaka claimed that she had been battling to pay the house rent and that, despite her pleas, Nedu hadn’t been taking care of the children’s expenses.

Nedu pays the children’s school fees, however, according to her; noting that, that was why she brought the issue out on social media over the weekend.

“He pays school fees. Why I came out was because I have been paying the house rent and I have been taking loans for four years after he kicked us out of the house where we were staying. 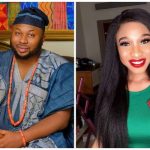