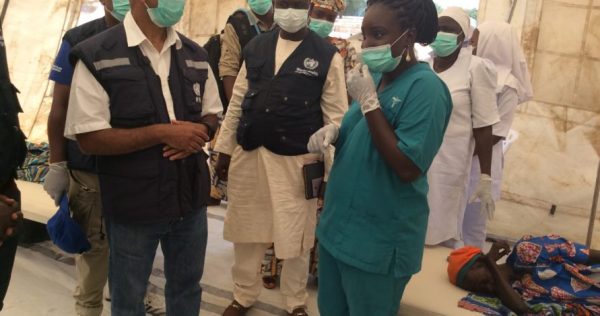 Dr. Alemu Wondi, the Country Representative of World Health Organization (WHO) in Nigeria, has expressed satisfaction with the rate of coverage and the intervention going on against the outbreak of cholera in Borno State.

Dr. Wondi who is in Maiduguri to access the level of intervention from his organization and the coordinated activities against the outbreak from other parts and way forward to curtain the outbreak visited Muna Garage Camp, one the IDPs camp hit by the outbreak.

Dr. Wondi at the Muna Garage visited patients at the treatment centre at the camp as well as vaccinate some IDPs.

While fielding questions from journalists, the Country Representative also informed that the outbreak was anticipated and adequate preparations were made to tackle it.

He noted that WHO together with the state government and other partners are working hand in hand to stop the spread of the disease, adding that he is satisfied with the level of coverage so far.

His words: “WHO is closely working with the state ministry of Health and other partners. We have supported the initial confirmation as well as in the process of the control particularly in the coordinator aspect and supporting the partners and state ministry of health in building of these treatment centers, provision of medicament, other supply and Human Resources. Particularly in the surveillance. Technical support. House to house finding of cases and directing them to the treatment centre. We also make sure that the water supply intervention groups is forcing the the information

“There was a discussion that took place two weeks ago to employ another intervention, that is vaccination. This vaccination has been undertaken now and so far this is the fifth day and the coverage is encouraging. There is another day of mopping up to make sure that those who are missed in the process are also covered.

“The protection rate is 65 to 70% but what is critical is that this is not the only intervention that protects people.. It is just one of the additional program. It’s important that the water is boiled before use, it’s important that they are not defecating anywhere but in designated places and health education and communication are the things we are supporting,” Dr. Wondi explained.

Speaking on whether the outbreak took them unawares, Dr. Wondi said, “We were prepared  right from maybe by May or June that before the rainy season that  the outbreak  was going to come.  The preparation was done in leadership with the  State Government and other partners had made adequate arrangement. Some of the medicine and kits were preposition”.

The WHO country rep was brief at the camp the doctor on duty, Dr. Hanatu Ngamjiwa told Dr. Wondi that there were a number of 26 patients at the facility with four new case of admission as at the time the country rep visited.

Dr. Ngamjiwa informed that the numbers of new cases at the facility has drastically dropped, just as an improvement of hygiene and sanitation at camp. 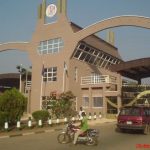 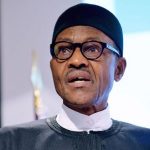